The Speaker of Ekiti State House of Assembly, Rt Hon Gboyega Aribisogan has been impeached after barely six days in office.

Gboyega has also been suspended indefinitely by 17 lawmakers for blocking the passage of the 2022 Supplentart Appropriation Bill. This impeachment happened on Monday.

Gboyega was replaced by Rt. Hon. Olubunmi Adelugba from Emure Constituency who happens to be the Assembly Chief Whip. He was unanimously elected by the 17 lawmakers present at a plenary presided over by the deputy speaker, Hakeem Jamiu as the new speaker.

Adelugba became the first female speaker in the history of Ekiti state assembly since the return to Democracy in 1999.

Adelugba took the oath of allegiance as she got ready to man her office.

Adelugba thanked her colleagues for finding her worthy to be elected. She promised not to take the confidence entrusted on her for granted.

There were six other lawmakers in the assembly who were suspended for compromising the election process amongst other unpatriotic conducts possible to threaten the peace of the state.

Read Also: Buhari to Shettima – I will respond when I hand over to you

The punishment for Aribisogan and the six others as announced is Suspension without pay with immediate effect.

This was announced by the House’ Deputy Speaker, Jamiu at the plenary. He also added that these lawmakers are to hand over government properties in their possession to the clerk of the State House of Assembly and any one of them who wishes to be reabsorbed must write a letter of apology to the legislative house. 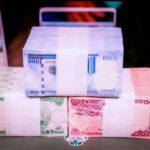