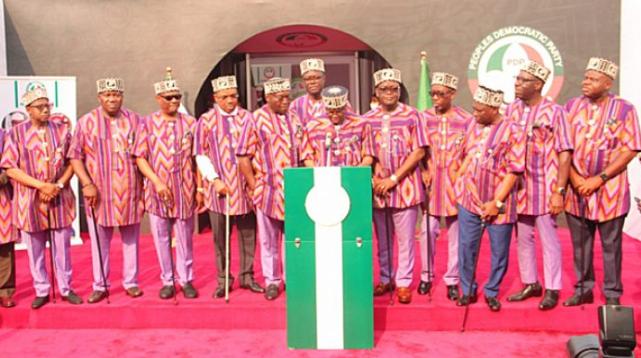 As a result of their meeting in Umuobiakwa, Obingwa, Abia State, yesterday, Peoples Democratic Party (PDP) governors, under the aegis of PDP Governors’ Forum, resolved to change the leadership of the country.

Describing the All Progressives Congress (APC) government as uncaring and insensitive to the plight of Nigerians, saying that the party has become a menace to Nigeria.

They consequently urged Nigerians to reject the APC, which they said is disorganised and as such cannot offer good governance to the people of Nigeria.

In their post-meeting communiqué read out by the Chairman and Sokoto State Governor Alhaji Aminu Tambuwal, the governors unveiled the readiness of the PDP to take over and offer qualitative leadership options to rescue the nation.
“We lament the terrible pain and hardship facing Nigerians in virtually all aspects of life was much better in 2015 under the PDP than today under the APC,” the governors said.

The forum urged all party members and party leadership to remain focused and united to win power in 2023, as well as tackle the myriads of problems facing the country.

Meanwhile, to show the party’s seriousness, from today, it will begin the process of mending the fence among members, especially on the contentious matter of zoning.

In a statement by the party’s National Organising Secretary, Umar Bature, the party will inaugurate 37 persons, who are expected to serve in the committee to determine a suitable zoning formula for the 2023 presidential election.

Read also: 2023 Election: Bukola Saraki – Ministers Resign if You Must Contest for Elections

“The National Working Committee (NWC) of our party, pursuant to the approval of the National Executive Committee (NEC), at its 95th meeting announces the appointment of the following party members for the zoning committee,” Bature said in his statement.

Among prominent members of the party in the committee are governors Darius Ishaku of Taraba, Samuel Ortom of Benue and Ifeanyi Ugwuanyi, Enugu State.

Others are Jonah Jang of Plateau, Ndudi Elumelu of Delta State, Attahiru Bafarawa of Sokoto and Ibrahim Dankwambo of Gombe.

The committee is also saddled with the responsibilities of allocating positions of Senate President, Speaker of House of Representatives and Secretary to the Government of the Federation (SGF).

They will also work out other leadership positions in the two chambers of the National Assembly among the six geopolitical zones.

The list contained a representative of each of the 36 states of the federation and the Federal Capital Territory.

FORMER Vice President, Atiku Abubakar, has also described Nigeria as a sinking ship that must be rescued urgently.

He made the statement while making his formal declaration to contest the Presidential election in 2023.

His words: “Nigeria is a sinking ship; it must be rescued urgently. That is why I am happy to announce my candidacy for the President of the Federal Republic of Nigeria under the platform of Peoples Democratic Party (PDP).”

At a crowded declaration ceremony chaired by former Aide-de-camp (ADC) to General Olusegun Obasanjo as head of state, Roland Omowa, Atiku declared, “under my captainship, this ship will sail to a brighter course by the grace of God. However, this journey is not mine alone.”

He also charged Nigerians to take the 2023 election as “a referendum to decide whether we want greatness or continuous destruction. It is a choice between two paths: the path of unity and progress or the path of division and backwardness.”

With a charge on Nigerians to rise above all sentiments and push the All Progressives Congress (APC) out of power in 2023, Atiku alerted, “the ruling APC wants to divide us; they want to divide us along the political, ethnic, and religious lines so that we forget to blame them for the rising inflation.

“They want to distract us from holding them responsible for the insecurity and rising poverty. They want us to be facing each other and hating one another. We should focus on the issues, not our differences. Let us unite and fight our common enemies: the lack of unity, insecurity, poverty, inflation, and unemployment,” he said.

While receiving members of the business community of Nigerians, led by Professor Isa Odidi, in his Asokoro residence in Abuja, today, Atiku vowed to bring back most of Nigeria’s best brains, who are scattered all over the world, to assist in the country’s development if elected president.

He said: “As major stakeholders in the success and progress of Nigeria, we are concerned about the quality of political leadership in the country.

“In fact, the success or failure of a country is directly proportional to the quality of its political leadership. Leadership requires imagination, resourcefulness, vision, experience, competence and a formidable track record.”

Also yesterday, speculations of possible consensus by all governors of the PDP were put to rest as Governor Ahmad Umaru Fintiri of Adamawa State openly identified with the aspiration of the former vice president.

Fintiri said, “Atiku is probably the most experienced person in the race at the moment, not only in our party, the PDP but in the country,” he added.

Citing the performance of Atiku in the business world, Fintiri said his preparedness to govern Nigeria is unequalled.

“Atiku Abubakar represents octopus cloud in thriving businesses around the world. He has sold water at the bank of both rivers Niger and Benue and built a world-class university in the heart of the most educationally disadvantaged region in Nigeria. He has created wealth and provided jobs as a politician. His democratic credential is unequalled. He was the vice president of Nigeria and probably the most visible ever,” said Fintiri.

Yesterday, the presidential aspirant of former Senate President, Abubakar Bukola Saraki, got a boost, as the caucus of the PDP in both Senate and House of Representatives encouraged him to intensify campaigns.

At his meeting with the House of Representatives caucus, a motion was moved to that effect.

Both meetings with senators and members of the House of Representatives were held at the homes of the Minority Leaders of both chambers, Senator Enyinnaya Abaribe and Hon. Ndudi Elumelu.

While addressing the lawmakers, Saraki said: “Here, I am amongst family, because we have all been in the trenches together. We have all fought to defend the unity of the legislature and preserve the Constitution of the nation.

“This is why, as I seek your support, I ask that you see this through the lens of capacity, competence, and a commitment to get the difficult tasks accomplished.

“Nigeria needs a leader who can get things done. A leader that can represent the country anywhere and make all Nigerians proud.”

Former Governor of Benue State and the Senator representing Benue North East in the 9th National Assembly, Gabriel Suswam, stated that Saraki was the leader that Nigeria needs at this difficult time.

“I know this young man. We were both Governors at the same time. Our nation has gone through a lot over the last eight years. We cannot be holding on to regional or tribal politics, otherwise, all of us will be consumed.”

According to Suswam, “If you find a gentleman like Saraki anywhere, who has shown capacity and integrity, we should not be talking about politics of tribe — we should be emphasising, who can take us out of the woods, because, right now, we are in a jungle.

“Most of us here have worked directly with Saraki. I worked with him as a Governor. Many of you worked with him when he was the Senate President. We can all admit that from the capacity that he has shown in handling difficult national problems, this is the person Nigeria needs at this time,” Senator Suswam said. 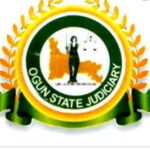 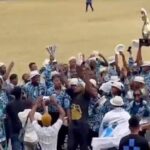