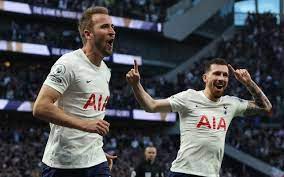 Harry Kane scored twice as Tottenham beat 10-man Arsenal 3-0 on Thursday with a north London derby masterclass that kept alive their hopes of finishing in the Premier League’s top four.

Tottenham would have been eliminated from the race to qualify for next season’s Champions League if they had lost to their bitter rivals on Thursday.

But Kane agonized Arsenal once again as the Tottenham striker opened the scoring with a controversial penalty.

Arsenal’s Rob Holding was sent off for two bookings in seven minutes.

Kane netted again before the interval and Son Heung-min bagged Tottenham’s third goal in the second half.

Instead of sealing a return to the Champions League for the first time since the 2016-17 season, fourth-placed Arsenal now face a shaky conclusion to the top-four battle.

Arsenal still hold a slender advantage, but the end of their four-match winning run leaves them just one point ahead of fifth-placed Tottenham, with both sides having two games left.

Conte said several weeks ago that it would be a “miracle” if Tottenham reached the Champions League given their lowly position when he replaced the sacked Nuno Espirito Santo in November.

But their victory in arguably the biggest north London derby since Arsenal won the league at White Hart Lane in 2004 ensured that miracle could still come true.

Conte believes finishing in the top four is “like winning a title in another country, a big achievement” given the depth of talent and wealth at the top of the Premier League.

To decide who takes the lucrative prize, Tottenham host struggling Burnley on Sunday then travel to relegated Norwich, while Mikel Arteta’s men visit Newcastle on Monday and entertain Everton.

Arteta’s bewildered expression throughout Arsenal’s capitulation suggested it is far from certain he will be able to lift his players to finish the job.

Third-placed Chelsea, five points above Tottenham, will likely need a draw from their last two games to be sure of their top-four place given their vastly superior goal difference.

As well as the huge European stakes for both sides, Tottenham also felt lingering resentment about Arsenal’s successful appeal to have this fixture postponed in January due to Covid and injury problems.